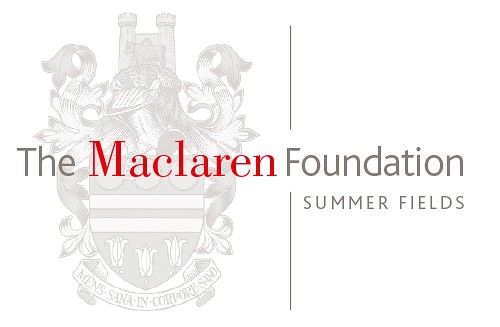 The Maclaren Foundation is a registered charity established to provide long-term financial support for              means-tested bursaries for pupils at Summer Fields Prep School.

I think it is very important for more young people to receive these kinds of  opportunities. The Maclaren Scholarship was invaluable to me. Without it, I doubt that I would be at my current university.”

WELCOME FROM THE CHAIRMAN

Since the Foundation was established in 2005 and, indeed before this as the Maclaren Trust (1993), pupils at Summer Fields have been able to benefit from bursaries on a sliding scale up to 100% of the fees with individual bursary holders being supported in many cases over a period of 2-3 years.

The Foundation represents the core values of the school: academic excellence, character development and social engagement.

An independent body of trustees appointed by the Summer Fields Board of Governors oversees the Foundation’s charitable activity. Investments are overseen by and the performance of the investments reviewed by the Trustees, which includes an investment committee of financial experts.

William has a long association with Summer Fields as a former parent and as a Governor of Summer Fields.  He  served as a trustee of the Maclaren Foundation before taking on the role of Chairman in recent years.

He is an exceptionally well-known and highly respected silk with a commanding reputation at the Tax Bar. He is sought after for the most complex and high-value work, including planning, trusts and estate matters.  He brings a wealth of experience and skills to his role as Chairman.

John Sfakianakis has been a Governor of the school and a member of the Finance and General Purpose Committee since 2020.

John was educated at the London School of Economics, Harvard and School of Oriental and African Studies, University of London.

John started his career with the World Bank in Washington D.C. followed by a long career in various financial institutions including Samba Financial Group, HSBC, Credit Agricole, Ashmore Group, and Societe General. In 2015, John joined the GRC as its Chief Economist and Head of Research. Latterly, he became a scholar at Pembroke College, University of Cambridge and a Fellow of St Benet's Hall, Oxford.

Suzette currently runs a number of residential and commercial property portfolios.  She formerly had a career in the city where she was a Director of Hambros Bank Limited and worked mainly in the Capital Markets sector. She has a degree from Southampton University in mechanical engineering and was educated at Wycombe Abbey.

Members of the Peake family have been pupils at Summer Fields since 1905. Suzette is married to Andrew (OS) and they have three sons who are also Old Summerfieldians (2001- 2012).

Suzette has been on the Governing Body since 2004 and joined the Maclaren Foundation as a trustee in 2009.

John has a long association with Summer Fields both as an Old Summerfieldian (1970-1975) and as a former parent, both his sons attended Summer Fields.  He has served as a Governor for the school and joined the Maclaren Foundation as a trustee in 2010.

In 2010, John was appointed as Jupiter’s Chief Investment Officer and a Director of Jupiter Fund Management PLC. He stood down from the CIO role in September 2015 and from the Director role in November 2016 to focus on running portfolios. Before joining Jupiter, John worked at Henderson and at Lazard Asset Management. He began his investment career in 1990.

John is a Fellow of the Chartered Institute for Securities and Investment.

“ I have no doubt that, had I not gone to Summer Fields, I wouldn’t have passed my exams into Eton and then got into the University of Bristol. It was a far higher level of education than would have been available to me otherwise.”

WHY WE NEED YOUR SUPPORT

Thanks to the generosity of our donors, the school, via the Maclaren Foundation, has provided bursary places to many boys since its foundation.

To ensure we have sufficient funds to meet the increase in demand for means-tested bursaries we continue to fundraise to provide places to more talented pupils.

Our aim is to enhance the Maclaren Foundation endowment fund so that we can build upon our tradition of excellence by widening access and enabling talented pupils, regardless of background and ability to pay, to benefit from an education at Summer Fields.

THE GIFT OF EDUCATION

Join the 1864 Society and pledge your regular support

Make a regular gift in the amount of your choice

Leave a gift in your will

By choosing to support the Maclaren Foundation you will be enabling talented pupils, regardless of background, to benefit from an education at Summer Fields.

For more information about supporting the Maclaren Foundation and how you can make a difference, please contact Daphne O'Connell, Development Director.

The Maclaren Foundation is a registered charity No. 1112215